Where Is This All Leading?


We’re all living in the middle pages of one of those dystopian sci-fi novels that I used to avoid. No avoiding this one, though!

I live in one of the seven San Francisco Bay Area counties that received the first legally-mandated shelter-in-place order in America. One Sunday in mid-March, I took a friend out for breakfast to celebrate his birthday. We had no idea it would be our last meal at a restaurant for months!

The idea of the private pre-through-5th school where I work, closing down for weeks or months, was impossible to imagine. Then, suddenly, we heard that our school board intended to emulate nearby public schools, which were deliberating and would announce their decision in a few days. During that interval, Governor Newsom’s proclamation came out, and it became a done deal.

For the past six weeks and three days, I’ve been carving out a new daily routine, nearly all of it at home:

Left: One of the delivery vehicles of White Pony Express, which delivers up to 20,000 pounds a day of fresh food free of charge to shelters and food pantries in Contra Costa County, California. Right: A reservoir passed during the author’s weekly early-morning food-delivery run.

The big—I mean, the long picture 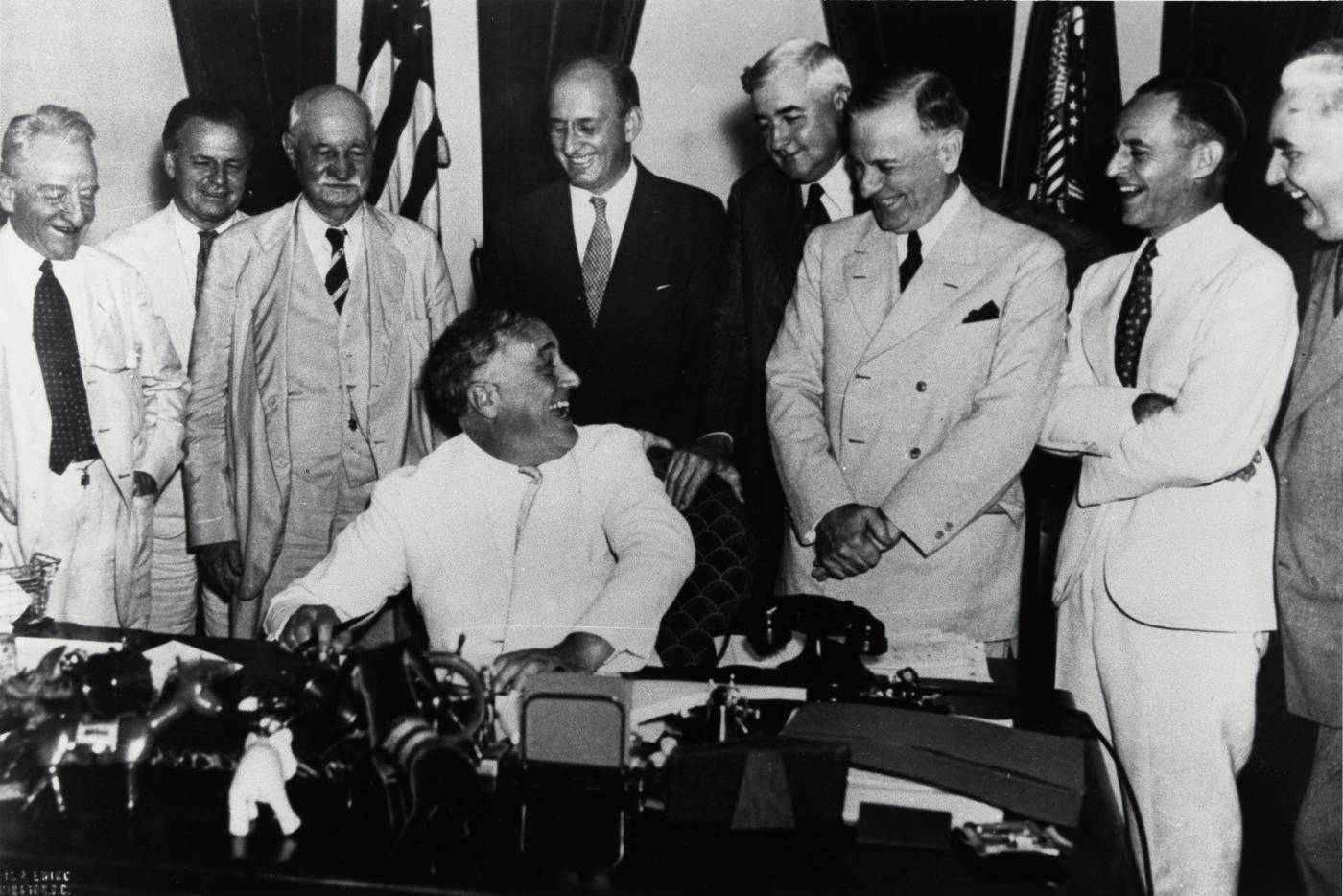 Franklin Delano Roosevelt, President of the United States from 1932 to 1945. Shown here as the consummate politician that he was, he also stressed the qualities of moral leadership in a president.

Where is all of this leading? At first, I spent a lot of time contemplating our world’s current trajectory. At least two elements of “all this” are obviously very troubling: many, many people are dying, and economies all over the world have shut down. Now, there are concerns about the food supply. What will the long-term results of this combination be? To this day, no one really knows.

Complicating matters is the fact that President of the United States, since proclaiming himself a “wartime President” in March, has done almost nothing to act like one. In the absence of a coherent federal response to both the medical and economic effects of the pandemic, some heroic governors have tried to take the lead.

Obviously, though, 50 state efforts duplicating (and, at times, competing against) one another can’t possibly do what a single, organized federal response—including mass production of needed supplies and their efficient delivery by the military—could.

Franklin D. Roosevelt said that the single greatest power of a president is to provide moral leadership. The current holder of the office seems to not even attempt that. Rather than even set the powerful example of a leader deferring to guidelines by wearing a mask at his press conferences, he appears bare-faced. Then, as everyone now knows, he goes on to say the most preposterous, medically-refutable things—which, if followed, would cause many to die.

All that those people who are serious about constructive responses to the pandemic (and its economic result) can do is look elsewhere, until someone fit to lead becomes our chief executive.

The increased visibility of “Brother Death” 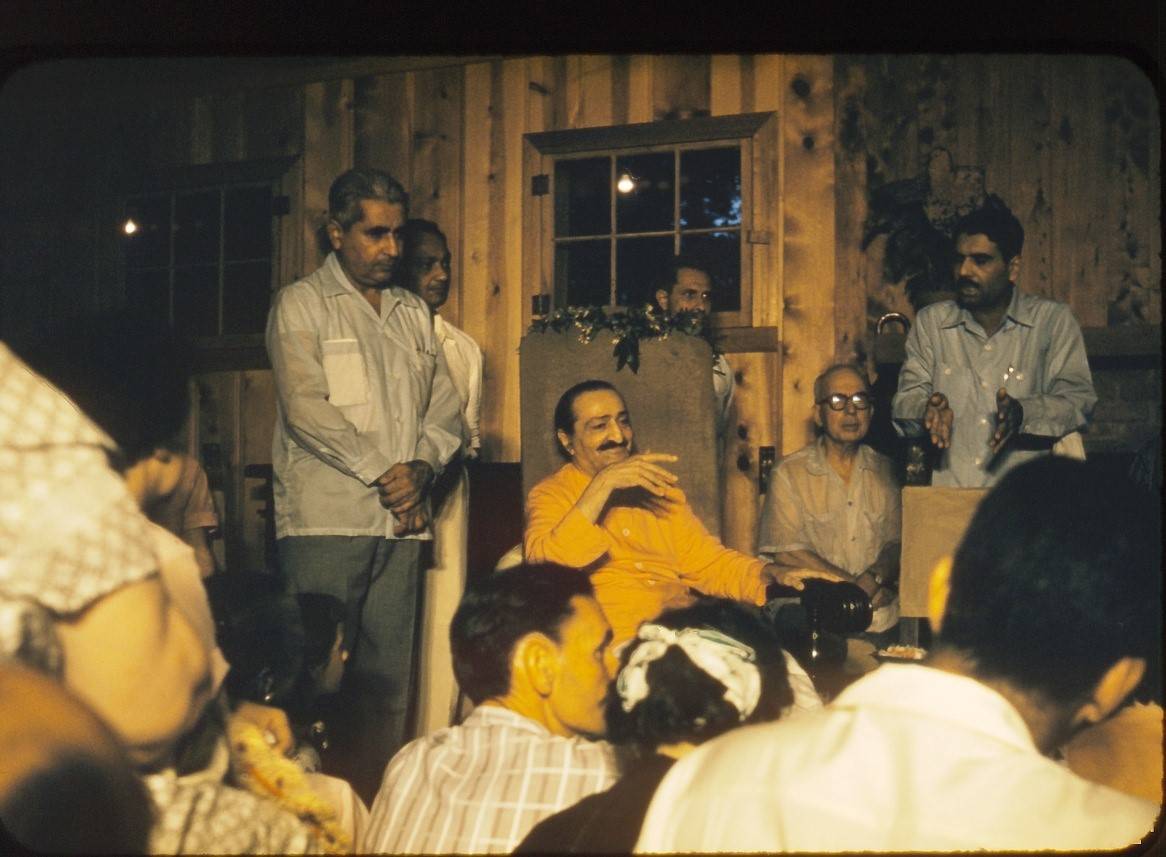 Meher Baba shown in Myrtle Beach, South Carolina, during a visit to the West in the 1950s. He didn’t speak and would often give discourses, tell jokes and reply to questions with nimble finger gestures that close disciples would then verbalize aloud to those present.

Prayers arise spontaneously from my heart, as I watch solemn scenes in New York hospitals—and increasingly, in nursing homes, prisons and meatpacking plants all over—on TV. Yet, in general, I have to admit that I enjoy the lifestyle the pandemic has created for me. It allows (in its own way) ample connection with people, as well as study, meditation, writing, art, music and exercise.

I’ve also, though, been meditating more on my own mortality. Haven’t you? The stark fact is, COVID-19 could strike any of us down at any time. Though in our part of California, very few have died or are sick with the virus, there’s simply no certainty nowadays. Anyway, confronting the issue gets one down to spiritual essentials, whether his actual demise appears imminent or not.

I don’t feel I’ve gotten very far in my efforts to come to terms with mortality, though. That is, as near as I can determine, because I’m what is in spiritual parlance called “veiled.” I’ve had a few spiritual awakenings in my life, but my day-to-day consciousness is simply an awareness of life in this world, not of the inner planes of consciousness.

My high school English teacher, during my sophomore year, announced to our class one morning, “Everyone in America secretly believes he or she is immortal.” She didn’t mean spiritually immortal. She meant that although we pay lip service to the idea that someday we’ll die, we don’t really believe it!

I’ve personally accepted Meher Baba’s teachings about death, since I first encountered them many years ago. Basically identical with those of other Sages, they’re part of what has been called the “perennial philosophy.”

As Baba describes it, physical death is like going to sleep. Instead of waking up in the same body, though, you wake up in a new one. He likened dying itself to “taking off a tight shoe.” Furthermore, he said that in the realm of the afterlife, we go through a re-evaluation of the life just past. Then, having absorbed those lessons, we reincarnate.

The difference between “knowing” and Knowing

I have faith that all of this is true. My initial connection with Meher Baba was an experience of such Love that it gave me conviction about everything the Master says.

And yet, though bolstered by faith, my understanding of these teachings remains intellectual. In actual experience, I feel kind of like the energizer bunny, who just keeps going and going! I can’t see the way out of here—the pathway, so to speak, by which one departs this world for the next. My cognitive dissonance in this matter is huge. I’m unable to feel I will die, as much as I know it’s preposterous to imagine I won’t.

My situation is not precisely the same as that of my mother, who died of leukemia in 2010, but in a way it bears a certain resemblance. As Mom neared the end of her earthly road, she found herself totally unable to let go. She was terrified by the possibility that nothing awaited her.

Feeling that she needed something more potent than my intellectual convictions, I phoned Rabbi Susan Talve, a friend who is the spiritual leader of a congregation near Mother’s home in St. Louis. I’d long intuited that Rabbi Talve had a mystical understanding. When I told her of Mother’s dilemma, she replied that she believed she could help. She’d spent so much time with people “living in two worlds,” as they approached the final transition, that the other world had become a real place to her!

Her visit the next day brought great relief to Mother, who passed away a day and a half later.

Perhaps  there is no “coming to terms” until the actual transition time. Perhaps only as the body weakens and begins to shut down, is the pathway beyond meant to appear. Yet, great Seers such as Jesus, Buddha and Rumi, as well as my own Guide, tell us repeatedly, “Die before Death!”

The real Death, say the masters of wisdom, is something different from what we think of as death. The great mystical poet, Kabir, said, “Die such a death that you will not have to die again. Die, all of you, in the real sense of the word, so you may live ever after. The stopping of breath and the absence of pulse are not real dying. It is no use letting your earthly body die; all your desires and longings should die. That is, seek out the death of Maya first. Then alone you will have died the real death and have been born into eternity.”

A model for Sadhana during the pandemic

Spiritual Sadhana, or wayfaring is, from start to finish, a matter of curtailing desires. But it’s not a mechanical process. To stop, say, eating all at once would be too much for many of us. And sexual desire, Meher Baba said, “persists up until the sixth plane of consciousness.” That is, until nearly the very end of the spiritual journey.

I’m personally at the point of attempting to work out how to heed this admonition to die before death, and somehow deal with my ego’s concentrated resistance to doing so. The stay-at-home pandemic seems to be a good time for such reckoning. It is a chance for some of us to join a thousand-years-long tradition of seclusion for the purpose of spiritual growth.

Some years ago, a man named Bo Lozoff, a student of Ram Dass, realized that a period of his life that he’d spent in prison resembled the life lived voluntarily in spiritual ashrams or monasteries. He wrote a book called We’re All Doing Time, about using enforced confinement to further one’s Sadhana. The ideas of the book are condensed in an interview he did with Sun Magazine.

The current pandemic is also, of course, an enforced confinement. An Australian poet and personal friend, Paul Smith, recently sent me a poem from a book he’s putting together, of translated poems by a 17th-century Turkish sage named Mirza Niyazi. Recently, Paul sent me a Niyazu poem about the value of seclusion, because he felt its message is valuable during these times.

I’ll conclude this piece by sharing that poem, and wishing everyone well in sheltering-in-place, in ways that open the heart and hold all beings in that vast open heart. 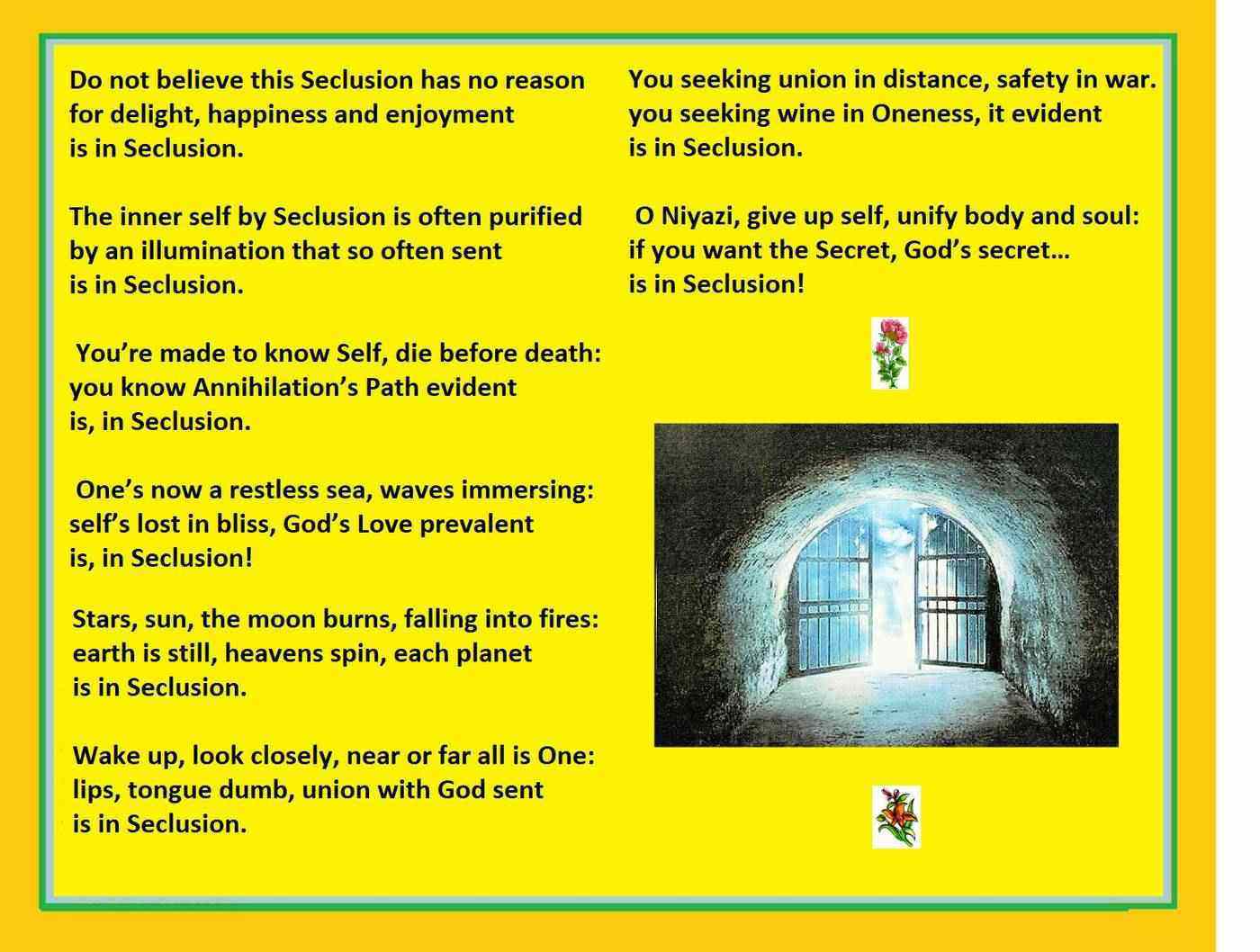 «RELATED READ» FROM CRISIS TO CONFLICT TO CLARITY: Understanding our feelings and reactions during our pandemic»